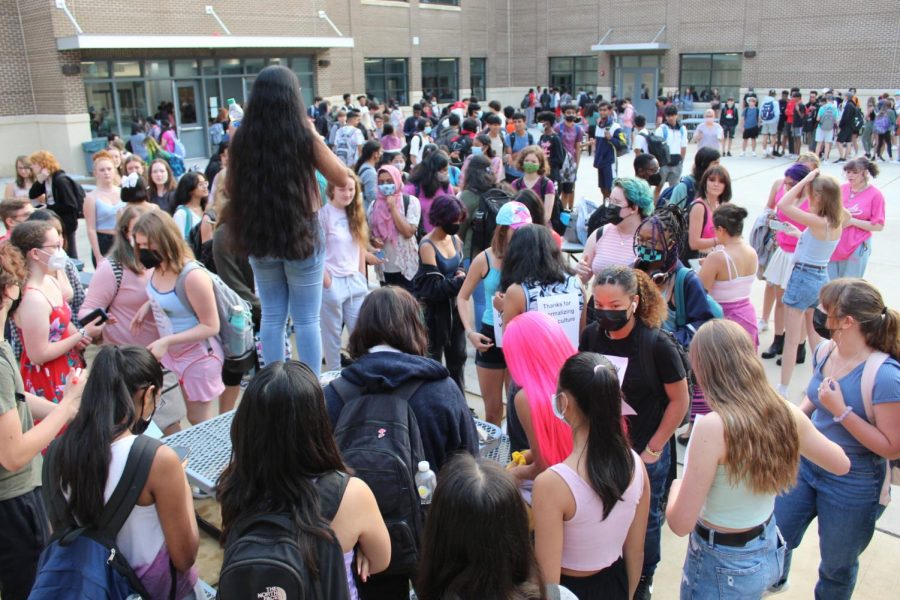 Students and administration consider the dress code and its effect

Every Forsyth County school has a dress code. This knowledge is not new; however, the response to it is. Recently, many Denmark High School students have become outraged at the new enforcement of the dress code that was updated in the Forsyth County Code of Conduct handbook in 2021. Because of school being intermittently closed for Covid Restrictions last year, the administrators put the dress code on the back burner. This led to students feeling like they could take more liberties with their clothing choices. Since our administrators want to put a focus on getting back to normal this year, they’ve brought back stricter enforcement of the dress code. This led to a defensive response from many students, as seen with the demonstration at DHS on Wednesday, September 8th in the courtyard.

“We need to stop sexualizing fashion,” says Alex Lockhart, junior. Lockhart believes that the dress code needs to be updated to fit today’s clothing standards and body types. “Why are we getting in trouble for our bodies; for how we’re made?” Lockhart previously attended a private school where uniforms were mandatory, so the switch from uniform to free choice gave them the inspiration to wear things they never would’ve at their last school. Lockhart is a strong advocate for freedom of expression and gender equality, so they felt that having a protest was the best way to get their voice heard.

Many students have vocalized their concerns with the dress code, bringing up points such as not nearly as many dress code rules that restrict males as there are for females. In addition, complaints surround the fact that enforcement of the dress code varies depending on body type. “If one person is wearing a tank top with spaghetti straps and another person with a bigger chest is wearing one, [the person with the bigger chest] will get singled out, because they’re being sexualized,” says Lockhart. “A stomach should not be sexualized. Neither should a shoulder or a back. We were given these body parts and we all have them,” Clara Machado says, “I’ve never been told by [a peer] that I need to cover up or that I’m distracting them, so why is it a big deal?”

Mrs.Geralds spoke on the topic saying that, “when students come to school they should be dressed for school.” She says that there is a time and place for expressing yourself with your clothing choices that may go against the dress code; for example, when attending football games or spending time with friends on weekends. Even though there have been many violations of the dress code, no students have been sent home or given ISS or OSS. Instead, students are asked to cover up, given a t-shirt to wear over the inappropriate clothing, or asked to have a parent bring them something else to wear Mrs.Geralds commented as well that administrators “enforce the dress code that is listed in the 2021-2022 Forsyth County Code of Conduct.” If anything, the Code of Conduct contains many other clothing articles that would be a violation if our admin were to approach every rule with strict compliance and consequences.

Ultimately, there are many aspects of the dress code that bring strong emotions and important questions to the surface. Why is it so outdated? Why isn’t it fair and inclusive? How can we express ourselves if we can’t with our simple fashion choices? The answers to these questions, although unknown,  are a hot topic here at DHS as well as many other high schools around the county. What is known is that if you want to change the dress code, you need to go to the source, the Forsyth County School offices. And all concerns over the dress code can be directed to [email protected]

For more information on the dress code, you can see the Forsyth County Code of Conduct.